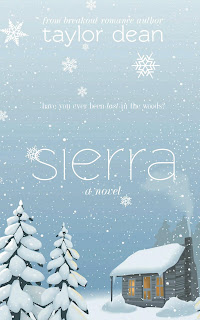 So far, the reviews for Sierra have been amazing. I am surprised, yet very pleased. As a matter of fact, I'm thrilled!

I love to post all of my reviews and point you to the wonderful blogs that have so kindly featured my books.

Warning: I LOVE both of these reviews, but, in my mind, they both contain spoilers!  At least, I don't want you to know these things before you read the book. So, if you haven't read it, and would like the story to unfold before your eyes, don't read them!

This first review is from Up All Night Reviews.

This book was pretty good. The story line, the adventures, the couple, just great.

In the beginning, we see Alyssa and her husband Sam, and their 2 year old little boy heading home from their family vacation in Tahoe. While driving through the Sierra Mountains (a trip I have taken many times in my youth as well) they were getting antsy. Sam was getting tired, Clay was fast asleep. Alyssa knew she'd be driving a little ways, soon. When Sam pulled into the rest stop to stretch their legs a little, Alyssa couldn't have dreamed her life was about to change forever.

When she met her guys back in the car, she noticed first the man in the backseat with the gun to Sam's head. Then the knife at her throat, and a stern voice telling her to drive.

Alyssa was scared, she was afraid for Sam and Clay, and herself. She thought once they got these guys where they wanted to go, it would be ok.

But that wasn't the case at all. When Adam told her to pull over, and get out, they thought this would be the last they saw of them.
But it just got worse.
All of a sudden she was in a truck, and images of Adam and Clay falling to the ground haunted her.

When Adam and Pa reached their destination, they got out of the truck and started to walk towards the woods. They hiked until they couldn't walk anymore. With a concussion, sore feet and only a few pieces of jerky (with pocket lent on them) and a small amount of water, Alyssa was struggling to keep up. But Adam wouldn't let her fall behind either.
Days went by, after a couple of times of trying to escape, and their beatings, she gave in. She felt numb.

After about 5 days, they were about out of food, and still not where they were supposed to be going. That's when Pa saw the cabin.

Alex lived alone in the middle of the mountains. it was a good 6 day hike to any amount of civilization. and that's how he liked it. He didn't want to be bothered. After 3 years of living in the mountains, with helicopter delivery once a year with his supplies, he was happy.
At least he thought he was happy. Until that one night when the front door burst open, and 2 men with shot guns pointed at him entered his life.

Once he got a look at those big doe eyes begging for his help, he knew then and there the battered, badly beaten woman was about to change his life forever.

Like I said, i really enjoyed the storyline to this book. It was a bit tame from what I usually read. But it was still pretty good. It had more than a few places where I cried. And I'm not talking about those silent tears that come when reading something emotional. I actually had to take a break to get myself under control -

I think the ending was a little rushed, though, as well as a few places in the story where they skipped through time. They spent so much time preparing for those 4 months of being snowed in, but we only got a page or two or what happened during those 4 months :(

My next review is from Kaisy Daisy's Reviews:

I loved this book, it was one I hated to put down. I also went through many emotions through out the book.

Alyssa and her family Sam her husband and Clay her two year old son were returning from a wonderful vacation at Lake Tahoe when something unthinkable happened. Two mountain men kidnapped them and made them drive into the mountains. When they finally stopped the two man killed her husband and son, and then forced Alyssa to go with them. This part of the story was so brutal and showed what strong spirit that Alyssa had she continued on to push on escaping a couple times only to be caught again by Pa and Adam. They kept her roped up at night and dragged her by a lease during the day. She was so tired. When trying to find their home they stumbled upon a cabin and a man living out in the wilderness by himself. Alex is a kind man and wants to help Alyssa, he will not let her leave with Pa and Adam.

I do not want to spoil the story so will go into no more detail, but this is a wonderful story about love and second chances. Its about continuing when you thing there is no hope and nothing to live for. It is about finding happiness even through the bleakest moments. I can't wait to read more books by Taylor Dean, she is a great story teller.

A special thank you to Jen and Kaisy for their stellar reviews!

Email ThisBlogThis!Share to TwitterShare to FacebookShare to Pinterest
Labels: reviews of Sierra