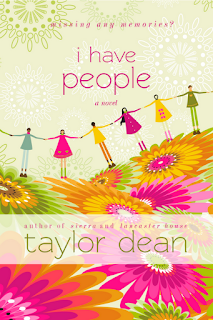 “For every minute you are angry,
you lose sixty seconds of happiness."
Ralph Waldo Emerson
My sisters and I used to make fun of our little baby brother when he lost his temper. "Temper, temper," we'd tease as if it was funny. A vein in his neck would bulge and his face would turn red.

In reality, it wasn't funny at all.
He grew up to be a wonderful young man. He learned to control his temper.
But, some don't.
My newest novel, I Have People, deals with several different concepts:

* Having PEOPLE in our lives who love us, who care for us and are happy to see us at the end the day.
* Finding the right man, while learning to watch for red flags that may tell us the newest man in our lives is NOT  a good person--or not all he appears to be.
*Memory loss. Replacing bad memories with good ones.
*Finding a good, kind, decent man. Not perfect, but kind.
*Losing your temper. Dealing with anger. Abuse.
The subject of anger and losing our temper is an interesting one. It happens to all of us at different times in our lives. The difference being that most of us know how to control ourselves. Everyone finds different ways to deal with anger. Some are able to cast it aside easily while others blow up. Not just blow up--EXPLODE! Have you ever seen someone lose their temper, I mean really lose their temper? Have you ever seen someone lose control of their selves insomuch that they do things that are unacceptable? It's a frightening experience.
I was speaking to a friend of mine recently who had read I Have People. She's one of my early readers. She actually thanked me for this book. She had her teenage son read parts of it because he had been dealing with  some bullying issues at school. She said it helped her son to understand bullying so much more.
That was unexpected and something I didn't see coming at all.  She also mentioned that a friend of hers recently lost her father. Her father had a temper and could be very abusive at times. At his funeral, my friend didn't understand how family members all got up, to include his daughter, to say nice things about him.
But, that's just it! People who have tempers are not filled with anger and rage at every moment of every day. They can be wonderful people who we love and adore. They have a good side as well as a bad side. They can be funny, normal, social people the  majority of the time. And that's what makes abuse so very complicated. We are emotionally invested in the relationship.
This is what I Have People is all about.
Posted by Taylor Dean at 8:00 AM