THE FAM: MY PEOPLE 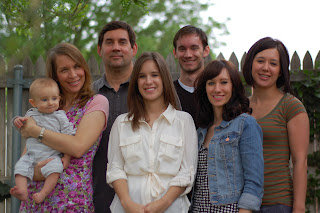 YES, I'm a grandma. And that cute little guy in my arms is the one who made me a grandma!!

Next to me is my hubby, my three daughters, and my son. (two daughters are married--husbands not pictured)

I actually have another grandson, but we lost him at eight months gestation to Trisomy 18 on Dec. 22, 2011. This is another story in and of itself, and one that I will blog about one day soon. I had no idea this condition existed until it happened to us. It's still a little raw right now and I'm not ready to share it as of yet. I plan to share the story of our little Jerad Harlan on the anniversary of his death, Dec. 22, 2012. It will be therapeutic.

I inherited the 'look younger than you really are' gene from my Mom. She still looks amazing, and I can only hope I'll look as young as her when I'm 70!

When I was 20, I hated looking young. People thought I was 12, and that's not a compliment!

I'm about to release my next book, "I Have People." Here's how the title of this book came about:

For about eight months I had an empty nest. (now two of my children are home again) The house was soooo quiet and I felt a little lonely. I've always been a stay-at-home Mom and I liked a household with kids coming and going all the time. To my surprise, I didn't have time to bask in loneliness. My daughters called on a regular basis, sometimes everyday, and my son called often too. It was then that I realized motherhood was far from over--the logistics had just changed! I had PEOPLE. People who loved me and cared for me, whether they were living at home or not. It was a wonderful realization and this experience inspired the name of the book I was working on at the time: I Have People.

I have people. Thank goodness. And those guys up above are my PEOPLE. The most important people in the world to me.

Tell me about your PEOPLE!
Posted by Taylor Dean at 12:25 AM

Email ThisBlogThis!Share to TwitterShare to FacebookShare to Pinterest
Labels: I Have People, My family