MONDAY MUSINGS: A TRUE SCARY STORY IN GIRL OF MINE

GIRL OF MINE is now available for pre-order.
Get your copy here:
AMAZON    AMAZON UK 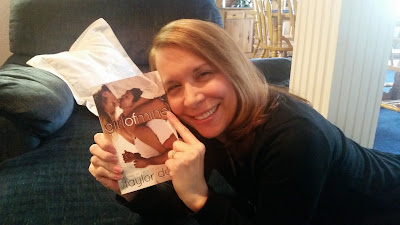 Holding the final finished product in my hands!

A few years ago, on a business trip with my hubby, we were traveling home and made a pit stop for the night. My hubby had made reservations in a very nice hotel. This made the trip into a bit of a vacation rather than a drudgery-filled business trip.

Instead, my overactive imagination took over.

The hotel was beautiful, but practically deserted. I turned into Stephen King for the night. I creeped myself out and scared myself to death.

The next morning, when we made it out of the hotel alive, I told my husband what had been in my thoughts the entire night. He was shocked by my dark thoughts. I feel like I could easily write horror novels. My mind goes there--and it's a frightening place. I seriously don't know how Stephen King sleeps at night.

At any rate, I'm not going to write horror novels, because I'd scare myself to death. 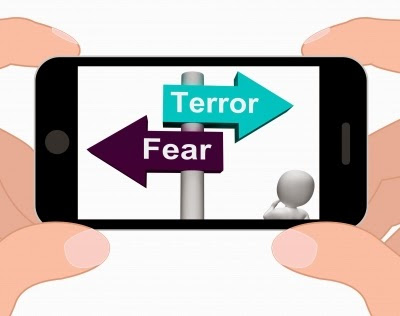 But I couldn't help adding my imaginary experience into GIRL OF MINE.
Obviously it didn't really happen and, of course, no one died. But the story tells what my mind conjured up while staying at a creepy hotel.
And when we left the hotel, I felt sooooooo relieved. . . . and so grateful my husband could come with me . . .

A writer's mind can be a scary place.
Needless to say, I will NEVER stay in that hotel again.
Seriously, if it was the only place available and there was a huge snow storm outside . . . I'd sleep in the car.

(Background: Troy, having been through a traumatic experience as a child, writes horror novels as an adult. He's sharing a short story he wrote with his friends, Luke and Jill.)

“There’s this middle-aged couple, deeply in love with each other. They decide to treat themselves to a night at a fancy hotel for their anniversary. They arrive and the wife sees that the hotel is this huge high rise in a somewhat rundown area of downtown. She doesn’t really know why, but she feels uncomfortable. The hotel is beautiful, with lots of charm. It’s an older building that has recently been renovated and refurbished. But the area feels weird and kinda eerie. There are lots of cars in the parking lot, so she figures it’s a popular place and she’s just being silly.

“They go inside and there’s a wedding reception going on in the hotel’s party room. People are arriving in their finest clothing, bearing brightly wrapped gift bags. The atmosphere is happy and festive. The wife feels a little more comfortable. They take the elevator up to their tenth floor room. The floor is deserted and the wife feels a chill up and down her spine. For the sake of her husband, she squelches her fear, feeling silly. Their room is immaculate and superbly decorated. They relax for awhile and flip through the TV channels. They get amorous with each other, but we’ll leave that part out for now.”

“Where’s the fun in that?” Luke says under his breath, making Jill grin.
“Get your mind out of the gutter, Graham.”
“Too late.” Luke winked at her and Jill felt herself blush.

Troy ignored him. “They dress and decide to head down to the hotel’s restaurant for dinner. They find everything is closed downstairs: the main restaurant, the snack kiosk, the salon, and the gift shop. Every single thing is closed for the evening, even though the posted hours say they should be open. Other than the party room, the place is deserted. There is a distinct lack of hotel patrons and employees, which the wife finds odd. The lone man at the front desk informs them that the hotel is catering their usual fare for the wedding reception and a limited menu for room service is available. The wife is feeling creeped out and really wants to pack up and leave, but she stays for her husband’s sake. This was her anniversary gift and she doesn’t want to ruin it.

“They go back to their room and decide to order room service. The husband makes a quick run to the ice machine and when he returns, he places a bottle of sparkling cider on ice to chill. The wife is touched by his thoughtfulness. They eat dinner in bed, watching a movie they chose on pay-per-view. Overall they have a romantic evening, filled with tender moments. In rare form, her husband constantly professes his love and how happy he is with her. He’s doting and speaks of some of their most treasured memories, things she hasn’t thought about for years. She’s thrilled, pleased with the state of her marriage, but the eerie feeling never leaves the wife and she has a hard time relaxing.

“She sleeps clinging to her husband and has several nightmares during the course of the evening. She awakens a few times to find her husband awake and simply staring at her. He tells her he loves her and to go back to sleep. She does, knowing she is safe. The husband works long hours and had been looking forward to sleeping in, but they both arise early and are eager to get on the road at first light. By unspoken agreement, a leisurely morning is nixed.

“The wife wonders if he is as creeped out by the hotel as she is, but doesn’t broach the subject. It’s almost as if speaking of the eerie feeling will make it real and bring it to life. They pack up and leave the room and the wife breathes a sigh of relief. She can’t get out of the hotel fast enough. As they walk down the hall toward the elevator, they pass the alcove where the ice machine is located. The wife glances inside and nearly trips on her own feet. The husband wraps his arm around her shoulder and whispers in her ear, ‘Just keep walking. Keep your eyes forward.’ The wife gulps in air, her breathing labored, but she does as he says, even though tears are now pouring down her face.”

“A ghost,” Troy confirmed. “He walks her to the elevator in silence. Several people are in the elevator already. Her husband whispers in her ear, ‘Look no one in the eye.’ She does as he says, her hands shaking and her knees wobbling. When the elevator opens, the lobby is filled with nameless, expressionless people, staring blankly and wandering around aimlessly. ‘Just walk forward,’ her husband says and she obeys. He walks her to the glass door at the front of the hotel and pushes the door open. ‘Go,’ he says. ‘Don’t ever come back. Don’t even look back.’ The glass door closes, but the husband stays inside the hotel. Panicked, the wife turns back and tries to open the door. It’s locked. The husband stands there, his hand on the glass, a last farewell. ‘No!’ the wife screams. ‘Come with me.’ He shakes his head in the negative and mouths the words, ‘I love you.’ Suddenly the expressionless people come forward and the husband is engulfed by the masses, disappearing in the crowd. The wife turns and runs to her car.”

Troy didn’t say anything more as he looked between them with a sly grin.
“And?” Luke asked.
“And that’s the end,” Troy finished with a satisfied air. 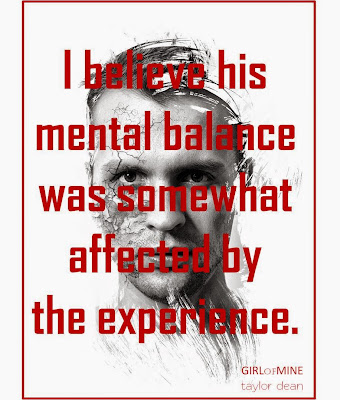 Email ThisBlogThis!Share to TwitterShare to FacebookShare to Pinterest
Labels: excerpt, Girl of Mine