ANY FLAVOR JELLYBEANS BUT BLACK--BOOK REVIEW

Jason Guile is bleeding profusely and often. It's not uncommon for his sneezes to be a mist of candied red. This can't be good for one's health. He thinks it's a shame he never got to graduate high school, go to college, get a job, and so on and so on. But he figures he may as well live life to the fullest while he still has it. No one can bleed all the time and go on living, right? Risk is no longer a concern.

Unfortunately, Carly loves them too -- even her lip gloss often reeks of black licorice.

Carly Henson has been Jace's best friend since they were kids, and has always been prone to accident... or so it always seemed. Carly shows up at Jace's after midnight with a black eye, busted lip, and purple bruises all about her neck and back. She has a confession to make. She's not accident prone; her father is an abusive, alcoholic asshole.

Jace finds new purpose in his existence. He can't die. Not yet. Carly needs him. The two embark on a journey to free Carly of her father's rage. Her only salvation seems to be her 18th birthday, and Jace is determined to keep her safe until she can move out and never receive her father's bashings again. The two are racing the clock, counting down to February 19th. But the stench of black jellybeans is a constant reminder that Jace is running a race of his own--one that we all eventually lose.

I met author Kenneth S. Harris when he contacted me awhile back. He was reading Lancaster House and wanted to know if I was interested in swapping book reviews. He'd written a book called The Perfect Tree. I agreed and ended up loving his book. You can read my review here.

Fast forward and Mr. Harris has written another book. Again, we agreed to swap reviews. He decided to read Girl of Mine and I happily agreed to read his new book, Any Flavor Jellybeans But Black. I greatly enjoyed his first book and I felt eager to delve into his newest endeavor. The title intrigued me from the get-go. I HATE black jellybeans or black licorice. The smell alone makes me sick. Therefore, I felt an immediate connection to the book. Secondly, I love the cover. Very clever.

This is a story of young love, of friendship, of wanting to do the right thing, but maybe not knowing exactly what the right thing is to do. It's a story of becoming an adult--and being expected to act like one--even though you're not quite considered one.

The writing is impeccable and it was so very easy to lose myself in the story. I love when a book is so well written I forget I'm reading and just glide along with the story.

I entered the world of three best friends, Jace, Carly, and Allen. They're teenagers preparing to embark upon adulthood as they figure their way through life. Both Jace and Carly are facing some fairly serious issues and the reader is allowed to experience these issues right along with them. The book is realistic in the way it handles teenager/young adult problems. I enjoyed the sense of anticipation laced within the novel. I constantly wondered what was about to happen. The  book had a nice pace with never a dull moment. As a matter of fact, I felt as though I was living the adventure, an invisible onlooker. Parts even made my heart race as I rooted for Jace and Carly to survive their predicament. (I hate driving in snow and Mr. Harris was able to communicate what it's like during white-knuckle driving.)

In the end, things wrapped up nicely. My only complaint: I wanted more! I wasn't quite ready for the story to be over!

This was easily a five-star read for me. But, personally, I don't care for swearing in books. I believe the language in Any Flavor Jellybeans But Black was realistic to the characters, however, I just don't want that type of language in my mind. Personal choice. That being said, I cannot deduct from my rating because the writing and the plot kept me hooked all the way through. It would be a disservice to both the author and the book to give it anything less than a well deserved five stars! 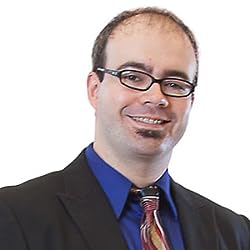 Kenneth S. Harris has a B.A. in English. His passion for crafting fiction has led to the creation of his novels The Perfect Tree and Any Flavor Jellybeans but Black, and several short stories. He currently lives in Kentucky with his wife and three children.

"Writing is an escape and a celebration of life, much like reading," Kenneth says. "Story telling is an essential part of the world's traditions and evolution. Who humanity is 100 years from now will likely be defined (at least in part) by the stories we tell."