I mostly write about my books and my writing on this blog, but today I'm going to write about something else.

I recently googled the title of this post, "How to Cover Wallpaper Borders."

You know what  I found? A whole bunch of posts that told me NOT to cover a wallpaper border. TAKE THEM DOWN was the general consensus. It was such a '"duh" moment. The information was not helpful to me at all. If I could remove them I would. I wanted to COVER them. So, I thought it was time to write a post of my own on the subject and maybe I'll be able to help someone who is looking to to do what I did.

We bought our house in 1994 and we had wallpaper borders put up in every single room except the bathrooms. I had no idea it would be a decision I would one day regret.
(Warning: Funky paint colors to follow! We had been living in military housing for ten years along with white walls and white tiled floors. Therefore we went a little crazy with color. We're still living with the carpet color choices as well.)

The first border I tried to remove was in the master bedroom. I followed some all natural recipe online that swore it would melt away my borders and make them come down easily.

I ran into a major problem. To my surprise, I found that all the borders in my house are attached directly to the sheet rock. There is no texturing or paint between the border and the wall. Removing them is nearly impossible.

Would a remover I can buy at the store work? Maybe. I've never tried one of them. They smell to high heaven and make me dizzy and lightheaded. In other words, I cannot remove the borders myself. I don't have the time OR the patience. I would need to hire out and I don't want to spend the money on it right now. The quote I received for removing the border in the kitchen alone was $500.00. We will do it someday when we renovate our home, but for the time being I needed another option, one I could live with without breaking the bank.

So, if this is what you are interested in doing, read on!!

My idea was to COVER up the borders because I just couldn't live with them anymore.

Here's what we did:

In the master bedroom, we covered the border with peel and stick floor tiles. They are brown and have a leather-like look to them. My husband cut them to size. After placing them on the wall, he put a small brown nail in each corner to hold them in place securely. I LOVE the look of the border now and even if we renovate, I would leave the border up. 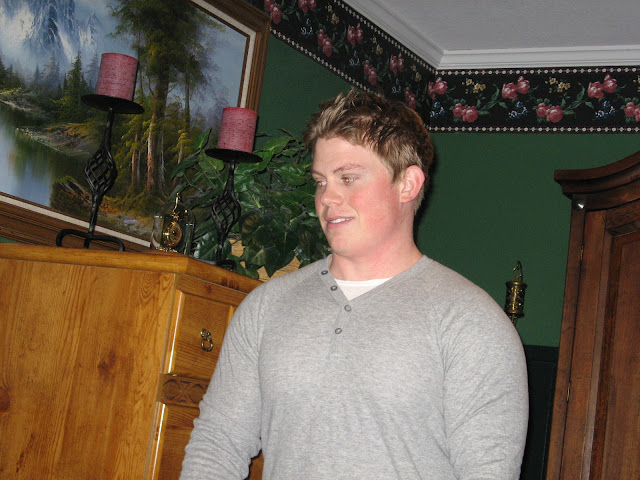 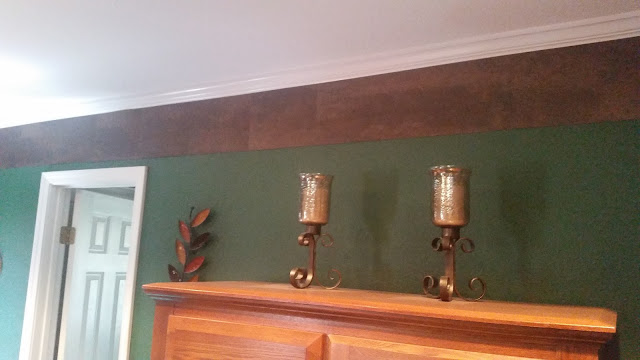 We did the same thing in the kitchen using white peel and stick floor tiles. It's not ideal, but it works for the time being. I don't love the way it looks, but at least the darn floral border is hidden. 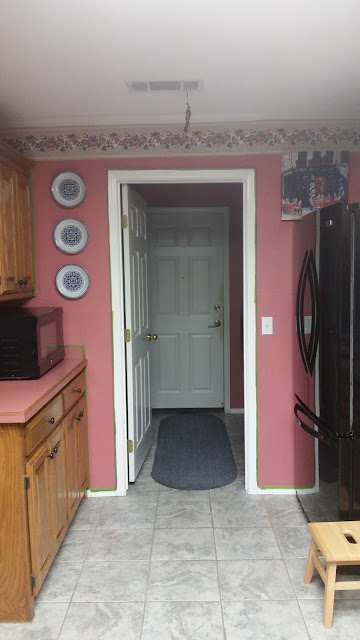 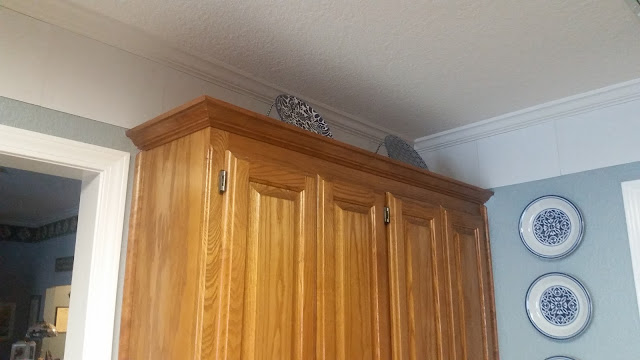 In my son's room, we had a space border, which he outgrew long before he begged me to change it. I finally gave in. We decided to tape off the top black stripe and the bottom black stripe and paint over the border with a contrasting color from the wall. We had no idea if it would work or not. I'm sure all borders are not created equal, so I don't know if this will work with every border.

We painted the first coat and could still see the border underneath. We thought it didn't work and began to brainstorm for creative ways to cover the border. Then we walked back into the room and realized that after it dried, it looked great. So we did a second coat and we LOVED it. 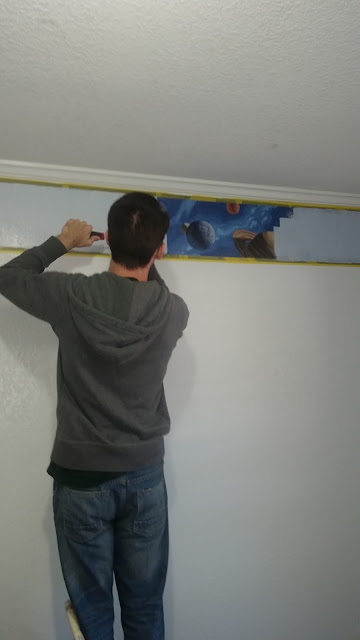 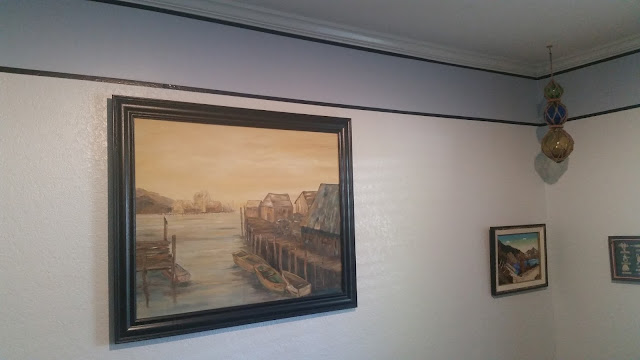 Recently we did the same thing in another bedroom. The border did not have a convenient black stripe at the top and bottom though. So I spent two hours painstakingly taping off a small stripe at the bottom and at the top. This prevents the wallpaper from peeling at the edges. It is also best to use a contrasting color from the wall. 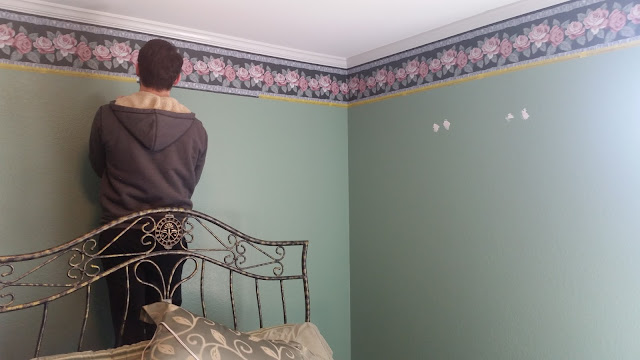 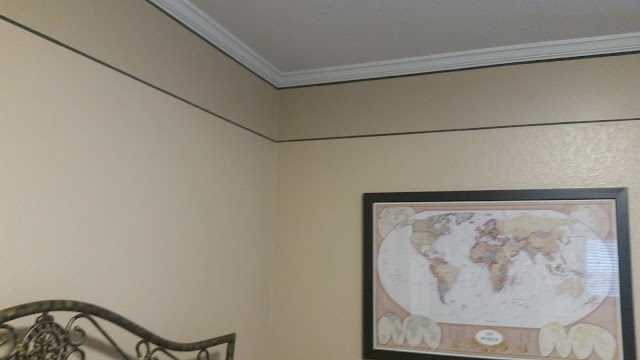 So, that's what we did! There is a way to cover wallpaper borders and not have them look horrendous. I realize this is not the ideal answer, but it worked for us! I hope this information will help someone else as they struggle with those darn wallpaper borders.

As for some of the other borders in my house, I'll just have to live with them for now! In all honesty, I still like the below borders, even if they are outdated! 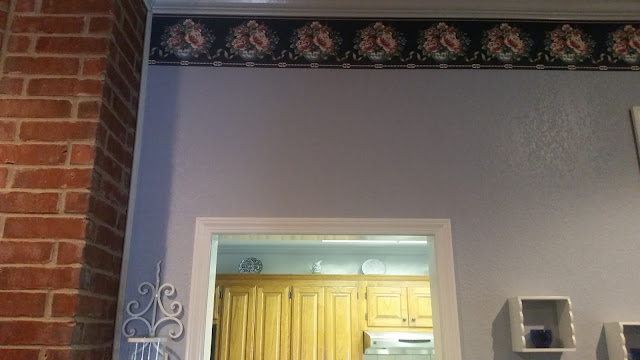 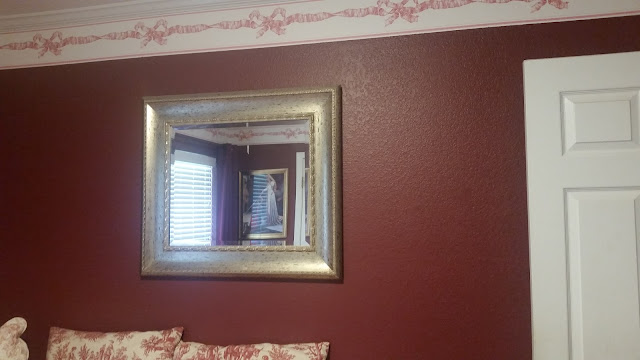 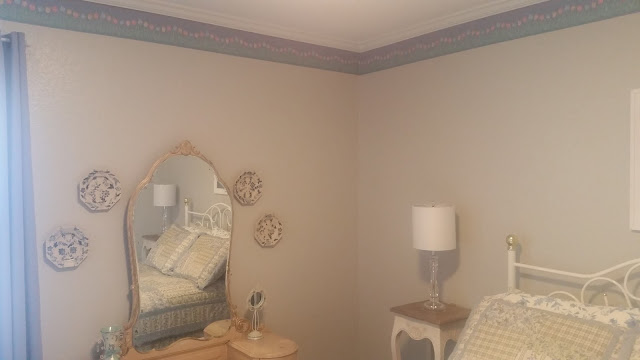